It’s been so long since I came back from Nepal that the whole journey now almost feels surreal, but a little scar on my wrist will always remind me that the trip really happened.

Trekking was not on my to do list before I left for Nepal. I didn’t have too much time and the monsoon season helped me to make up my mind. However, I was sitting in a cafe, listening to one of the volunteers talking about their trekking experience and I realised I can’t miss it while I’m in Nepal.

My boyfriend at a time, had a professor who was always going to Nepal for trekking holidays so he was able to recommend a guide. I wouldn’t worry about arranging the guide before coming to Nepal – there are always plenty who are eager to get out to the mountains and it’s cheaper to arrange something from Pokhara (if you’re doing a trek in Annapurna Himalaya range). The trek I did was called Ghorepani Poon Hill trek and it normally takes 5 days to complete. You can easily do it without a guide and it will save you a bit of money, but being alone and not having a chance to do a proper research,  I decided to go with a guide.

I met my guide Palu in Pokhara a day before the hike for some tea. Palu was over 40 and didn’t look like a super fit guy from the first sight, but he seemed like a nice person so I thought let’s do this. It did later turn out that I was much fitter than him (something to consider if you’re impatient like me), but he had a big heart and kept repeating that he was the luckiest man in the world to be able to do the job he loves.

We started from the village called Nayapul early next day. The path was passing through beautiful forests and some tiny colourful villages. There were plenty of tea houses to stop at, rest and have some food. The whole trek that day lasted about 5 hours after which we stopped in one of the villages along the road.

The second day was pretty much the same, but the path got steeper. It was a beautiful day and I didn’t find it too challenging. We settled in Ghorephani for the night, hoping to get to the Poon Hill in the morning. Unfortunately, the clouds were rolling low and when I woke up the next morning it was raining. There was no point in going to the Poon hill viewpoint. We continued towards Gandruk, even though the weather wasn’t great. Oh well, it was a gamble to go trekking in a rainy season.

We didn’t reach Gandruk that day (just weren’t rushing anywhere and the weather wasn’t great) and decided to stay in a place with the total of three houses. There were only two people in the village, a couple who got married when the guy was 13 and a lady who was then 20. We were chatting about life in the mountains and emigration, since the man spent a few years working abroad (very common story for loads of Nepalese families). The also showed and explained to me how they make their local alcohol Raksi, which I even got to try.

When trekking you get used to getting up early and sometimes it really pays off. Happened to me on the 4th day of the trek when I got to see bits of the snowy peaks hanging between the clouds. I could only see small patches but got really excited since it was the first day I could actually see something. Other days were just all about walking through the beautiful forests and villages. That’s when I slipped, fell and got injured my wrist badly enough for it to scar. No regrets, life felt pretty amazing that morning. 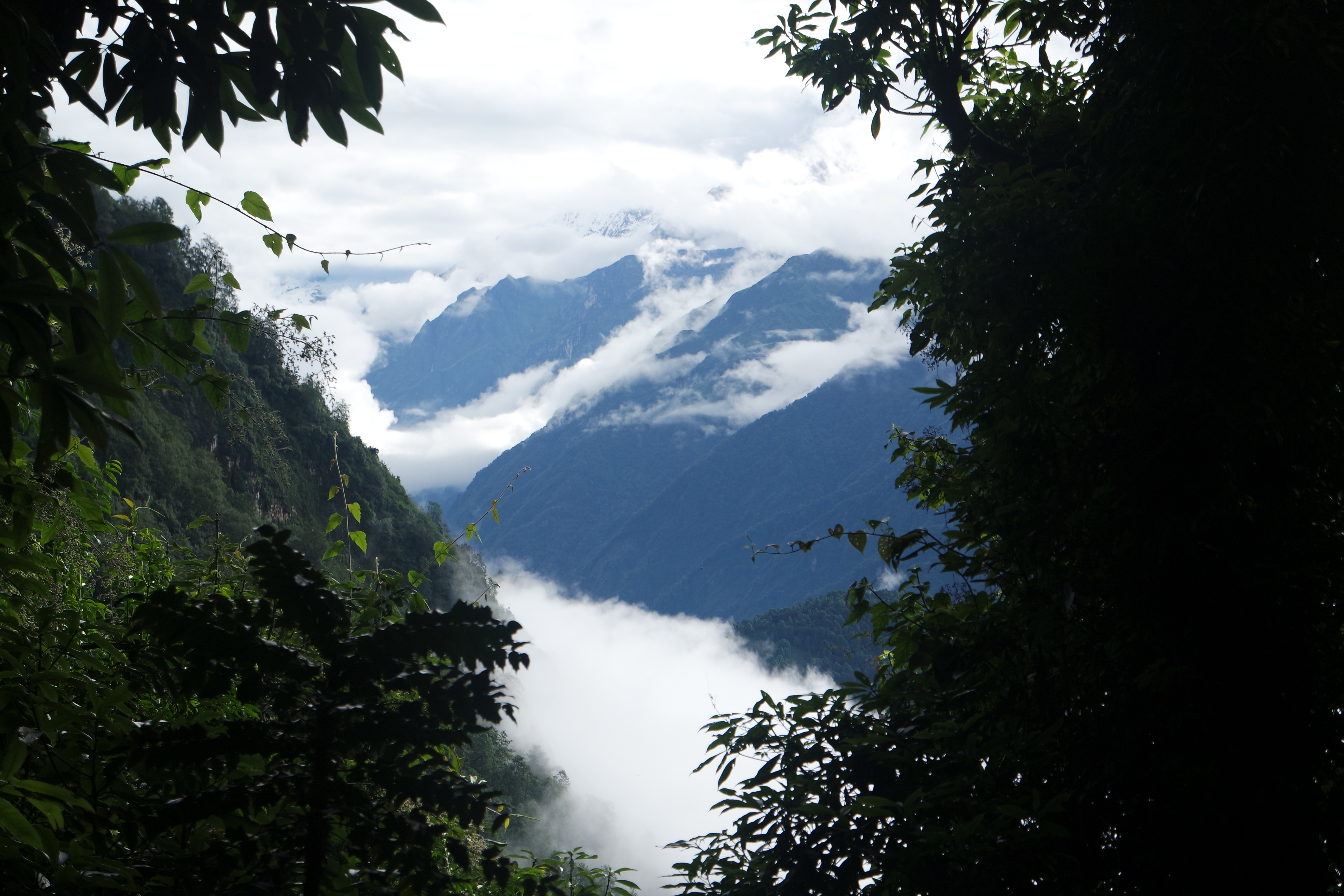 We got to Gandruk and spent a bit of time exploring this beautiful village. There were some really steep sections down and up that day and got caught in a strong rain, but I was quite happy to be out in the mountains and got to eat probably the nicest dhal bhat in Nepal, so the challenges didn’t matter too much. We stopped in a random village along the way for the night. There were loads of tiny clouds hanging around the mountains and I was excited to be going to bed after seeing that view. 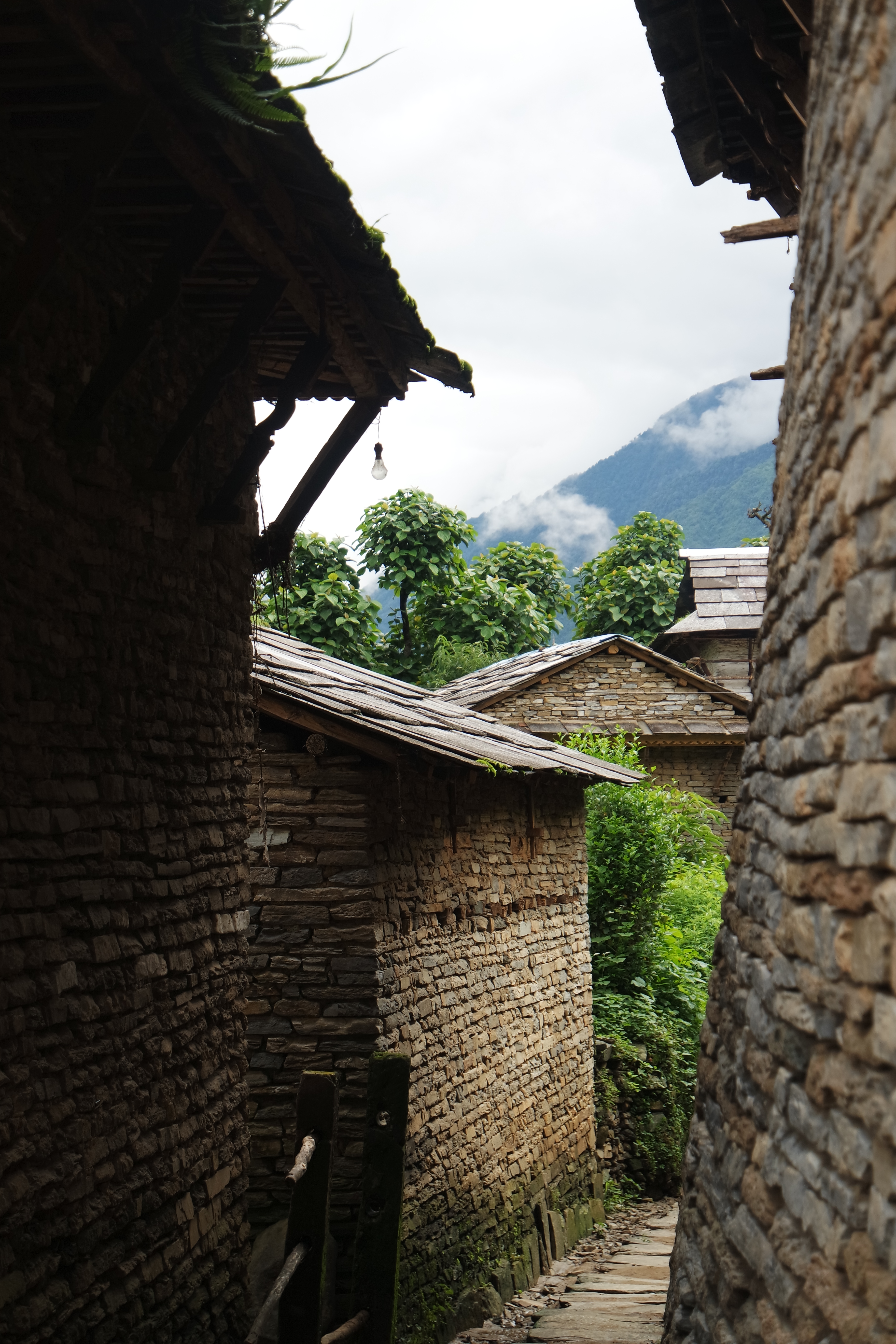 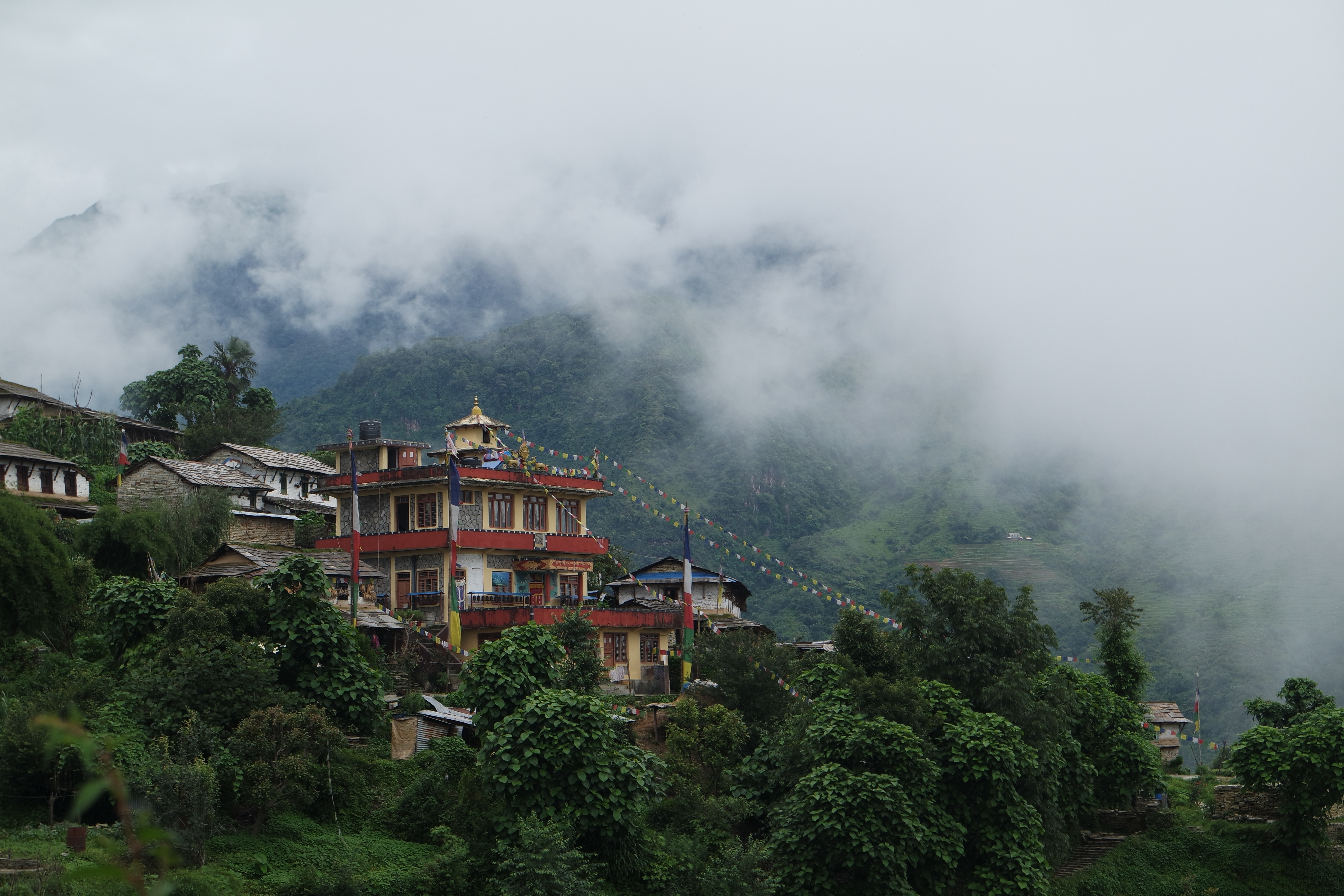 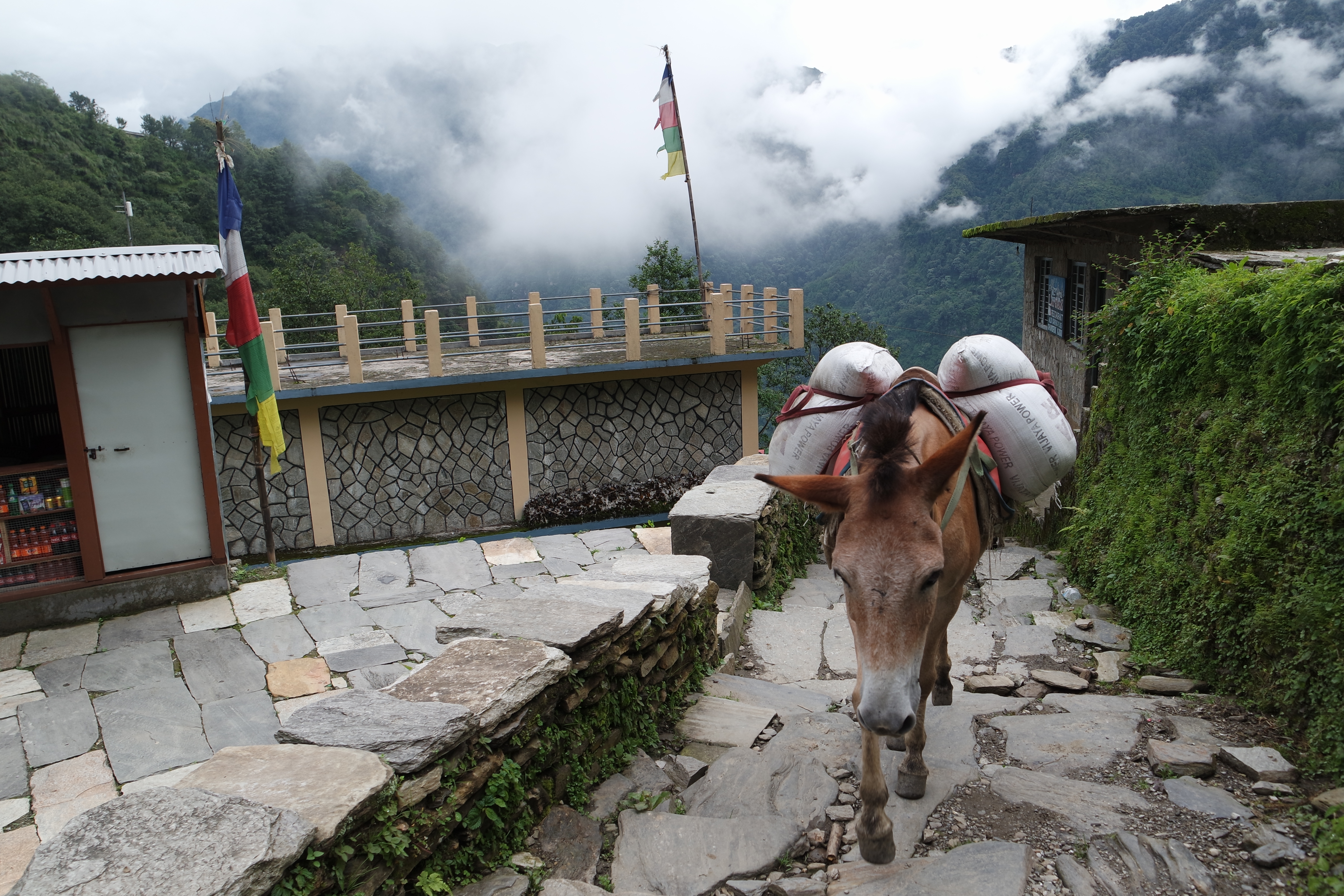 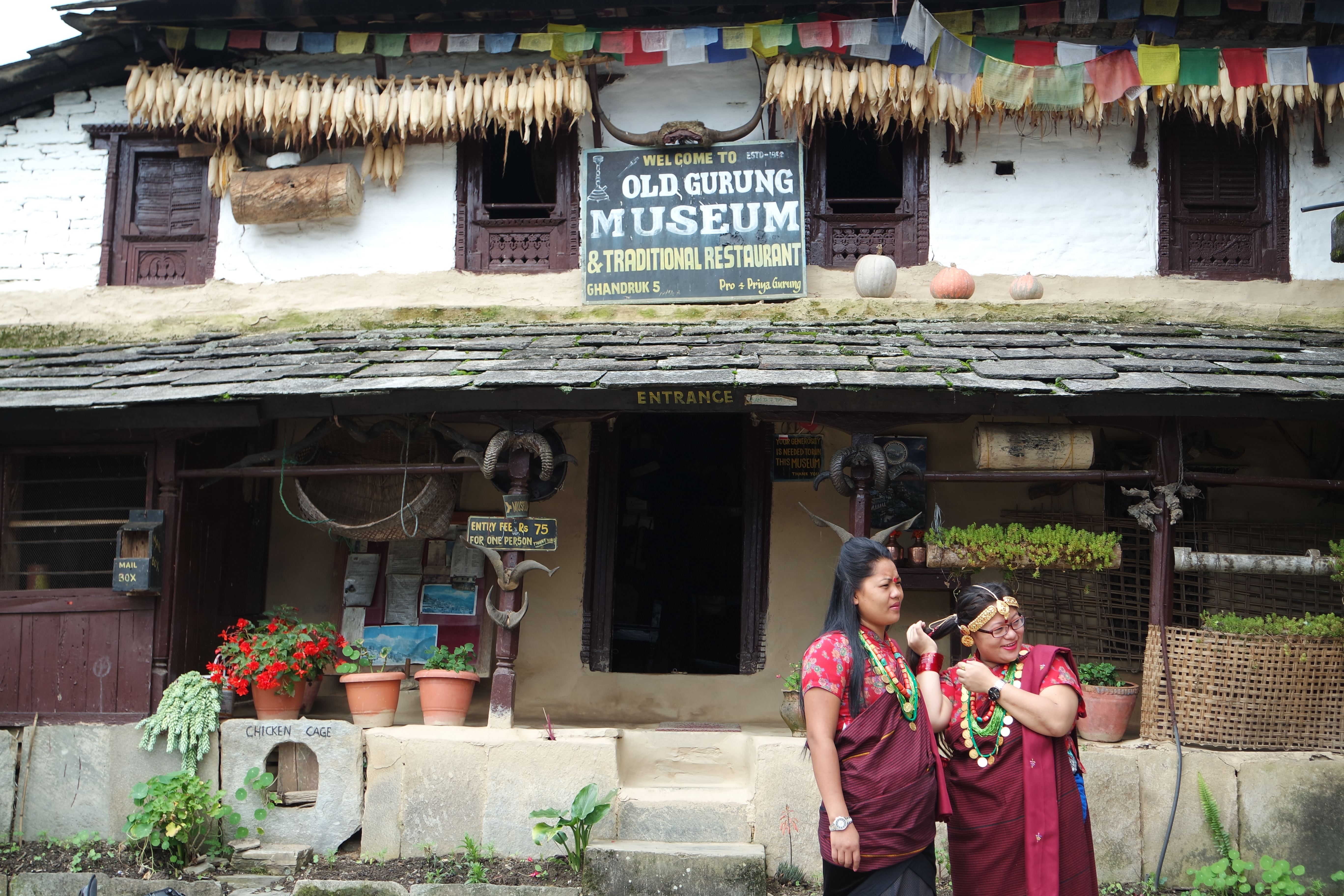 I woke up early again (4.30am or so) the next morning and realised that the clouds lifted! They were moving away and finally the first time in five days I could see one of the peaks! It was magical. I was extremely happy and struggled to walk away from that view. Later in the morning the clouds took away the beauty again. 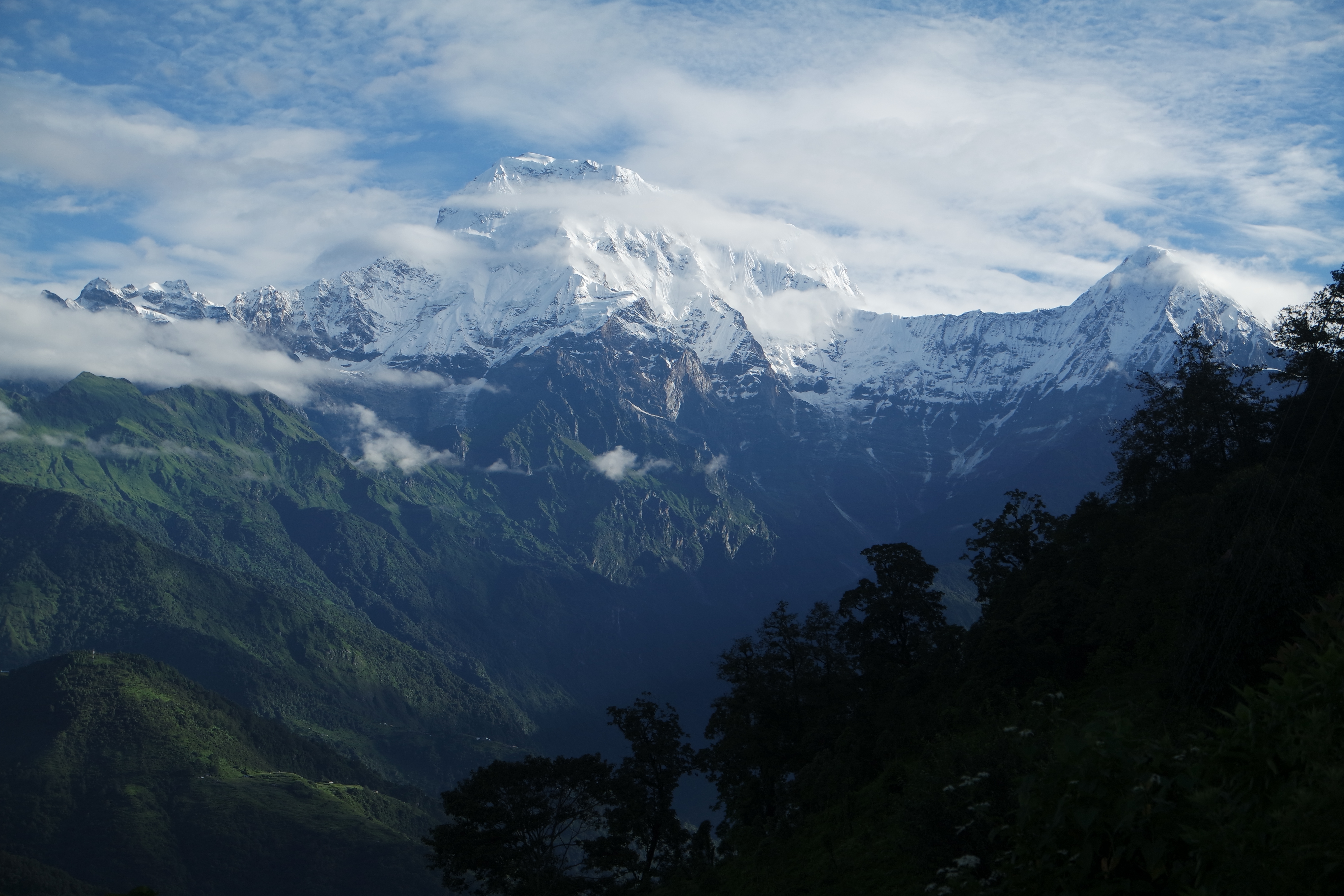 So five days later, the trek was over and I said bye to Palu. I think I got lucky, because during the rainy season it’s really hard to see anything, so I expected nothing at all, but got rewarded with some stunning views. It was amazing to be out walking for five days, walk past these beautiful villages, eat really tasty dhal bhat and try out my poor Nepalese with the locals. It was good to go with a guide, because he arranged all the accommodation and permits etc. and I didn’t have to worry about getting lost. It wasn’t a popular time of the year to go trekking so the mountains were quiet and I absolutely loved the time I could spend with my thoughts or listening to Palu’s stories. The only major downside were the leeches – they were bad, hanging on the grass, jumping on you as soon as you stopped and sucking the blood like there was no tomorrow. Not going into details on that, but having a guide who is slower than you plus the leeches who can’t wait to get on you, is a bad combo.

I just want to finish with something positive – if you get a chance to go trekking in Himalayas, then go! No matter what time of the year it is, you will find beauty, freedom and loads of smiles along the way and it will be an experience of a lifetime 🙂